The Modern Myth of Soho’s Dr John Snow.
History often gets things wrong either because of the way in which events are initially reported or as a result of later re-interpretation.

Such is the story of Dr John Snow who persuaded the Board of Guardians to remove the handle of the water pump in Soho’s Broadwick Street at the height of the 1854 cholera epidemic.  Memorialised by the John Snow pub and the replica water pump, which used to stand nearby on the corner of Poland Street, many today are of the mistaken belief that the Victorian doctor was the only scientist to discover cholera is a water-borne disease.


Snow’s work did not make national headlines and newspapers in the 1850s were not brimming over with reports of Snow’s discovery, or that the handle removal had saved lives.

Over 480 people died of cholera in and around Broadwick Street between late July and the middle of October 1854, but at the time the role played by Snow was not seen as particularly significant. Contrary to popular belief, the removal of the pump handle did not improve London’s sanitation overnight, and whilst Snow correctly concluded that cholera is contracted by ingesting tainted water, his work was overshadowed by others working in the tight-knit medical establishment and the widespread conviction that cholera was spread by foul-smelling air.


It is not all that surprising, therefore, that following his untimely death in 1858, Snow’s contribution to science was largely forgotten. In Bloomsbury when the new building to house the London School of Hygiene and Tropical Medicine was opened in 1929, it incorporated a frieze around the top of its exterior into which was carved the names of those considered to be of outstanding importance in the field of hygiene. Snow’s name was not included. 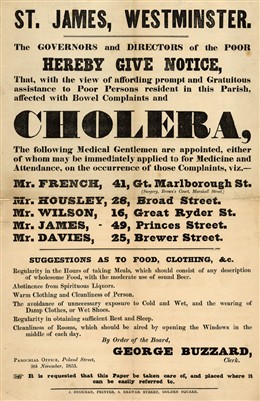 Yet today the story of the removal of the pump handle is seen as a symbol for scientists working in the field who fight - as Snow did - for effective and swift action to prevent the spread of epidemic disease.

Snow’s story is remembered because it was re-told in the early twentieth century by the American public health expert, William T. Sedgwick who, in his 1902 textbook, Principles of Sanitary Science and the Public Health, called Snow’s work ‘a monument of sanitary research.’

Since 1902 science students in the United States have been taught the story of Snow and the pump handle removal and as a result many Americans who come to London are keen to visit Broadwick Street to see the replica pump.  Until recently the replica was situated on the corner of Poland Street, unfortunately some distance from its original position, potentially contributing to a re-interpretation of historical events.
Few realise the site of the original pump is to be found closer to the entrance of the John Snow pub. Its position is marked by a single red granite kerbstone and a discreet sign which incorrectly implies that Snow alone discovered cholera is a waterborne disease. Sadly little is known about Snow’s groundbreaking work on chloroform or his conviction that alcohol was a danger to health.


History has re-interpreted Snow’s story so that today the one lasting memorial to this visionary scientist - and one of the Victorian era’s greatest advocates of temperance - is a Soho pub.

Join us on Thursday, 6 Oct 2016, when author, linguist and historian, Amanda J Thomas, will be our guide on an historical journey through Soho in the time of cholera at Blacks Club, 67 Dean St. W1D 4QH.
Doors open at 7pm, talk begins 7.30pm. This is a Free event exclusive to mosoho followers and Blacks members.

Space is limited so please book early to reserve a seat.email: events@blacksclub.com 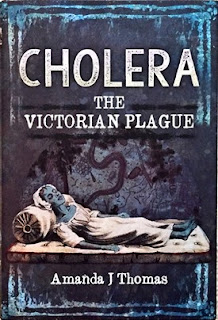