In the Shadow of the Prince Edward Theatre.

The Prince Edward Theatre has been a familiar Soho landmark for generations of people to enjoy since opening its doors on the 3 April 1930. Its own illustrious history has seen the theatre go through many transformations over the past 86 years. In 1929 the buildings which stood on the corner of Old Compton Street and Greek Street were demolished to make way for the new theatre completely eliminating any trace of the people and business which occupied the address of 41 Greek Street and 53 Old Compton Street.

While the buildings were home to a diverse mix of inhabitants and occupations the silk and linen drapery business was the main trade which eventually spanned several buildings as the business grew from small shops to a wholesale warehouse business.
Here are just a few of the businesses which occupied the space along with Auctioneers, Candle makers and residents living in the rooms above the offices and shops.
1796, 41 Greek Street, Thomas Clarke, Silk Dyer
1807, 41 Greek Street, Stephen Callahan, Silk Dyer
1808, 53 Old Compton Street, William and Joseph Bryan, Linen Drapers

The Evening Standard, 16 October 1828 reports, new proprietors of the “Emporium” Messrs Wagner and Chapman, Greek Street Soho, The business closed in 1830 when William Chapman and George Wagner were declared bankrupt. 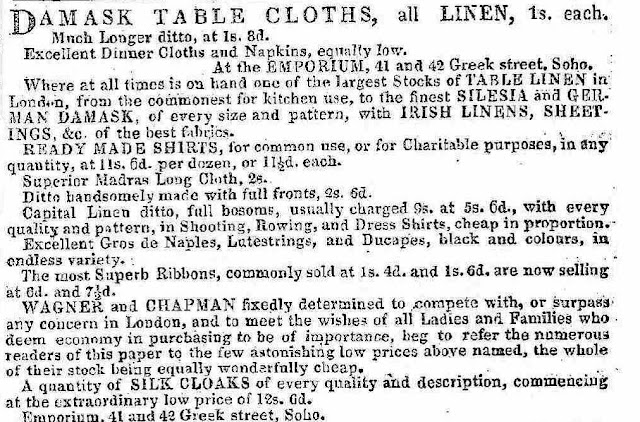 In 1862, the final chapter of the address at the corner of Greek Street and Old Compton Street commenced when William Taylor Reddan a butcher’s son from Parson Drove in Cambridgeshire opened his drapers business, William Reddan & Sons Ltd.
William’s empire spanned several buildings 51 to 54 Old Compton Street and 41 & 42 Greek Street with around 14 drapers’ assistants and staff living above the business. Reddan’s was renowned for its Victorian charm and its most discerning cliental on its books which included Winston Churchill and members of the Royal family. 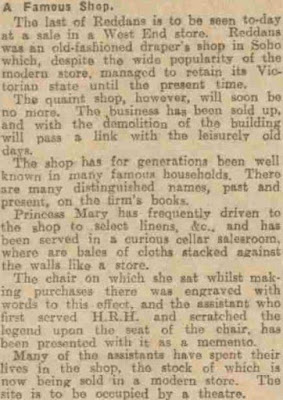 Members of William’s own family worked within the business, his brother Charles set up his own drapers business in North London. William died in 1920 year after his Wife Emma and was survived by his four children; in 1928 his children Minnie and Charles wound up their fathers 66 year old business and sold the premises to the Hay Hill Syndicate to make way for the Prince Edward Theatre. Reddan’s loyal staff moved on and his trusted store managers were remembered in Williams will.
On Monday 3 September 1928 The Evening Telegraph reports on the close of Reddan’s, One landmark falls into the shadow of another.
Further reading at  Arthur Lloyd Music Hall and Theatre History Website

The Prince Edward Theatre research by mosoho volunteer Sarah Buttery.
Sarah’s own family has a long history in Soho with Italian restaurants; Sarah worked for Kettner’s before its closure last January to make way for the next phase of its life and has researched the history of Kettner’s, the families and people involved in running the business and holds a private archive of information and artefacts which she has collected over the past few years. I hope Sarah will share this untold story with us in 2017.


We offer a bespoke research service to business and individuals. If you'd like to find out more please email: you@mosoho.org.uk