Piccadilly. My Stop, by Clayton Littlewood.

I step off the train, onto the escalator, up the stairs, until I’m above ground, on the Dilly Boy ‘meat rack’ of old, on the outskirts of Soho. I walk down Brewer Street, past the ‘closing-down’ Vin Mag, the NCP Car Park, my mood lifting as I enter the village, following in the footsteps of my heroes; Wilde, Crisp, Almond and Horsley.

I first came to Soho in the 80s, drawn by the Non Stop Erotic Cabaret world of seedy films and sex dwarves. I’d stand outside Madam JoJo’s, gazing up at Marc’s flat, or linger outside the Trident Studios on St Anne’s Court (home to Bolan, Bowie and Freddie), hoping to catch a glimpse of my hero. Then at night, high on speed, I’d climb a rickety staircase on Wardour Street to the The Pink Panther, mixing with rent boys and goth girls, East End crims and West End toffs, drag kings and scene queens, ‘dancing, laughing, living, loving’. That was my Soho, so long ago.

From the dying embers of the sex industry (on Walker's Court) I cross the film world of Wardour Street, turning into the gay world of Old Compton Street. On my right, Cafe Espana. On my left, St Quentin’s old haunt, The Black Cat (where he was beaten by ‘the roughs’). The street’s awash tonight, with tourists and hen nights, Hari Krishnas and socialites, a melting pot of London life, thrown together on one street, like a modern day Hogarth painting. I walk past the 2is (the birthplace of British rock and roll), a pack of bears outside Comptons (the new Coleherne clones), bowing my head in remembrance as I pass the Admiral Duncan, breathing in the rich aroma from the 125 year old Algerian Coffee Shop, until I’m standing on the Dean Street crossroads. It was these magical few yards that Daniel Farson captured when chronicling Bacon’s ‘gilded gutter life’, that 50s Love Is The Devil drunken period when he’d stagger from Gaston’s bohemian The French House, to Muriel’s ‘concentration of camp’ at The Colony, recovering over breakfast at number 50, Cafe Torino’s, where a ten foot marionette once perched above the door, and where ‘dark Italians and pale young artists and poets’ would search halfheartedly for jobs. I have a connection to this building. This is where my partner and I once lived, in the damp rat-infested basement, just feet away from Elizabethan plague pits (and where I too would chronicle life on this street).

I turn into Dean Street, waving at Maggie, one of the madams from the ‘walk up’, heading for Meard Street, the little cobbled Georgian thoroughfare where the famous Soho clubs The Mandrake and The Gargoyle once stood; where Tallulah Bankhead danced, where Fred Astaire was entranced, where Farson took Josh Avery in the book Dog Days of Soho. The prettiest street in the village. Whenever I’m in Soho I make a point of coming here. I stand outside number seven, the house with the sign that reads,

‘This is not a brothel. There are no prostitutes at this address,’ and I remember. For it was here that Sebastian Horsely, the Soho dandy, once lived. I would ring his bell, the shutters would open on the 1st floor and he’d lean out, in a black silk negligee with a marabou feather–lined neck, his face coated in a fine white powder, his eyes caked in last night’s mascara and he’d purr ‘Hello Romeo, Juliet here. Welcome to Horsley Towers.’ When he died his coffin was wrapped in blood-red tissue paper, draped in jewels and it was placed in a Victorian style horse drawn hearse. And the hearse went all round the streets of Soho. It was as if Sebastian was saying a last goodbye to the village that he loved.

Now I’m back on Dean Street, looking toward The Golden Lion (a one time serial killer haunt). It was here I last saw Pam, the local homeless ‘celebrity’. Wherever I was in Soho, Pam was here too. If I was walking past the Coach and Horses, Pam would step out of a doorway. If I was having a coffee outside Maison Bertaux, her radar would home in on me, dressed in her usual attire; camouflage trousers, donkey jacket, ‘barn owl’ NHS glasses, sporting a number one haircut. ‘Gotta gold one for me?’ she’d mumble. I’d hand her a coin. She’d squint at it, not looking impressed. ‘It’s all I’ve got, Pam.’ Then she’d wrap her arms around me, snuffling into my jacket. ‘Thank you ... Luv you!’ And off she’d trundle, like something from Beatrix Potter. Pam the Fag Lady. The hardest worker on Old Compton Street.

I turn left into Old Compton Street, and look, there’s the woman with the striking eye makeup and the ‘bum length’ multi-coloured plaits. And over there, that’s Michele, the aging trans woman, shuffling past, in a moth-eaten fur. Like an ancient Romanov in exile. This street maybe predominately youth oriented, but the old return, often unnoticed, to remember, to reflect. They see a different Soho. The ghosts.

A minute later I’m at ‘Fruit Corner’, the proliferation of coffee shops on the corner of Frith Street, within sight of Kettners. It is said that Wilde and Lord Alfred Douglas entertained rent boys there. And a couple of decades before them, two other doomed lovers, Rimbaud and Verlaine, socialised in a public house on this street. And this is what I love about Soho - sitting in these coffee shops, by the window, writing in my notebook, watching the mayhem outside - I imagine the artists, the writers and the eccentrics that have flocked here over the centuries, attracted by the cosmopolitan feel, the lure of sex, and the hint of danger that lies within. You can’t transport this vibe. It’s in the brickwork. It’s in their footsteps. The High Street chains maybe moving in, but old Soho is still here if you care to look. There’s nowhere like it in the world. And one day it will rise again. It always does.

Blogger, newspaper columnist, clothes store owner and Soho scene veteran Clayton Littlewood's first book, Dirty White Boy: Tales of Soho, was published in 2008, with a book launch at the infamous The Colony Room Club. The book was named the GT book of the year in (2009). 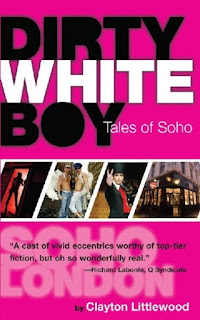 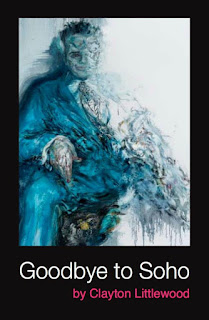 Goodbye to Soho. is his follow-up. www.claytonlittlewood.


A Call for Volunteers. Caravan Club Project. In 2017 organisations across the country mark the 50th anniversary of the 1967 Sexual Offences Act that partially decriminalised homosexuality and the signals it sent out about rights and freedoms. This spring, The National Archives and the National Trust are working with set designers to recreate the Caravan Club of 1934; an illegal gay club that was the subject of a sensational court case in 1934. The space will act as a focal point for a wider programme of volunteer led tours, debates, events, and a guidebook that celebrates the history of club culture c. from 1918 to now in the Soho, Covent Garden and Fitzrovia areas. There will also be a physical and online archival displays curated by The National Archives.We’re offering 25-35 volunteers the chance to be trained as National Trust tour guides as part of the project. In addition to meeting like-minded people and broadening your knowledge, you’ll be invited to a special ‘club night’ for volunteers to thank you for your time.If you’re passionate about LGBTQ+ heritage, love learning about London’s history and are a confident speaker in front of small groups, we’d love for you to get in touch. Click here for more info on volunteering.