“Murray’s Cabaret Club…We star showgirls walked bare-breasted on to the stage, and the hostesses, all cleavage and chat, moved among the wealthy and aristocratic middle-aged [clientele]…It was only after I left Murray’s and returned to the real world that I realised the strange underground fantasy life I had been leading” – Christine Keeler.

In 1913 one of London’s first nightclubs opened on Beak Street.

Its American proprietor Jack May was alive to the tango craze then sweeping through the West End, and his exclusive venue was to host its wealthy enthusiasts. But scandal haunted the dance-floor and May was deported back home after allegations of opium trading and police bribery. In his place arrived nightclub aficionado Percival Murray (the surname was coincidental!) who revamped the Club in 1933.

Soho was then a hot-spot for the shabby and sleazy: for gambling dens, clip joints – anywhere that fuelled the demand for out-of-hours drinking. Not Murray’s Cabaret Club. Mr Murray was soon employing a 130-strong staff, amongst whom were classical choreographers, celebrated composers, lettered lyricists, and skilled seamstresses. And, of course, the dancers, showgirls and hostesses.

Together, they pioneered the art of the cabaret floor-show. Two shows a night comprised three glamorous numbers based on different themes, each illustrated by elaborate – albeit scanty – costumes. Their standard was superlative. Their precision was balletic. And their format was unique; no other West End venue offered such inventive floor-shows that dissolved the traditional stage/audience separation.

The racy and respectable flocked nightly to Murray’s intimate basement venue. Royalty, film stars and leading politicians rubbed shoulders with notorious gangsters. Princess Margaret, King Hussein of Jordan, Jean Harlow: membership was eclectic, if exclusive. Even Winston Churchill attended, though his visits were apparently more discrete; allegedly, a screen would be erected to shield the Minister’s identity. Murray’s was where Gertrude Lawrence debuted as a chorus girl, where Kay Kendall worked before shooting to Hollywood fame, and where Ruth Ellis modelled before her hanging for murder. Society osteopath Stephen Ward was one of its best customers, and there would meet Murray’s showgirls Mandy Rice-Davies and Christine Keeler.

Ward took Keeler – a teenage runaway – under his wing, whisked her off to aristocratic parties at Cliveden, and introduced her to government Minister John Profumo. Her love triangle with both Profumo and a Soviet spy would soon spark a national scandal. It hailed the downfall of Harold Macmillan’s government, and the birth of the Swinging Sixties. 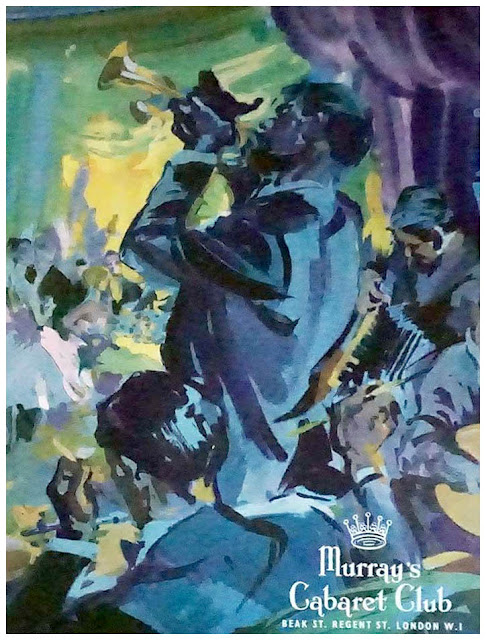 The Club could only struggle on though the opening of the Playboy Club in 1966 sounded the death knell; Murray’s recipe of mild titillation and sophisticated entertainment looked dated in comparison. Although the amazing costumes and floor-shows cost a fortune, Percival Murray refused to update the venue and offset the enormous overheads by opening a gambling floor.
Murray’s was forced to close in 1975. Though once the wealthy owner of a Rolls Royce collection, Central London flats, and hotel suites in Cannes, Mr Murray was now bankrupt and relegated to living in his chauffeur’s garage on what had been his country estate in Churt, Surrey. The chauffeur’s wife, Murray’s wardrobe mistress Elsie Burchmore, ended up with the Club’s costumes and designs.

“There’s nothing much left of [Murray’s] except the legend and the memories” wrote Christine Keeler years later. Little did she know that 380 costume designs by Ronald Cobb, Michael Bronze and Hilda Wetton were soon to come to light. For it was on a chance visit to an auction in Surrey that vintage poster dealer Charlie Jeffreys acquired the costume designs from the Burchmore family.

They date from the late Thirties to the mid Sixties and have been the nucleus of ‘G-Strings and Gin Slings: The Story of Murray’s Cabaret Club’, an exhibition that ran for a month at the Century Club, this year. Mounted by The Museum of Soho in collaboration with Jeffreys. It has also featured costumes and other ephemera, including the original Club signage, menus and pamphlets. 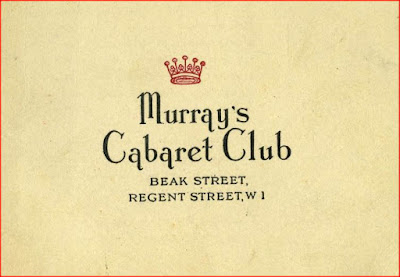 In the Fifties, these designs injected a rare sparkle into a West End blighted by austerity. Now, hidden away carefully for decades, this has been their first public display. An amusing assortment of naughty policewomen, French maid fantasies, demonic dancers and space-age headdresses…their sparkle has never dimmed…

Ben Levy - curator and historian previously with the V&A in their Theatre and Performance department.

With thanks to King of Soho Gin, Shaftesbury Plc and Yak El Droubie of Korero Press
Posted by Mo'soho at 13:01