Charles Booth's Poverty Map and what it tells us about late 19th Century Soho.

As the London School of Economics revamps and expands its Charles Booth Poverty Map website, Sarah Wise reveals what the Booth survey tells us about late 19th-century Soho.

On 15 May 1888, one year before publication of the first volume of his Life and Labour of the People in London survey, Charles Booth gave a lecture to the Royal Statistical Society, revealing his investigative team’s preliminary findings on the living conditions of the 909,000 inhabitants of East London. At the end, Booth expressed the desire that somebody would undertake the same investigation for the other areas of London.

In Booth’s audience was Robert Valpy – barrister and West End charity campaigner. He took up Booth’s challenge, and with a team of philanthropists and youth workers, Valpy spent the summer of 1888 creating a 27-page micro-survey of Soho and St Giles-in-the-Fields.
Valpy had a survey population of 113,000 – just one-eighth of Booth’s East End total. Keeping to Booth’s methodology, Valpy concluded that while there was a smaller percentage of people living in chronic poverty in West Central than in East London, nevertheless, those who were experiencing precarious employment or unemployment endured deeper poverty than their counterparts in East London.

Soho rents were significantly higher than those charged in the East End, he pointed out, with 6 shillings affording a three-room lodging in the East but just a single room in Soho.

Soho is a 1680s development, which had by the mid-18th century fallen on hard times and remained so throughout the 19th. Regent Street had been built in the second decade of the 19th century specifically to segregate Soho from wealthy Mayfair. A phenomenon that still frustrates today is that there are few access points into and out of Soho to Regent Street. But Mayfair has twice as many entrances, and broader ones. It was designed like that, to encourage Mayfair and discourage Soho!


The district was dominated by small-scale workshop manufacturing but there were also a number of large firms operating in ‘heavier’ industries, such as glassworking and gun-making, and big breweries and food-processing plants. One of the largest factories in the district was RW Wilson, a tin-plate works on a huge site between Wardour and Dean Streets. Soho was additionally noted for piano and organ manufacture.

One of the reasons that, towards the end of the 19th century, people believed the East End was poorer than ‘Up West’ was that as well as being a hard-working part of town, Soho had become, as historian Judith Walkowitz has put it, ‘the bureaucratic centre of empire, the hub of communications, transportation, commercial display, entertainment and finance... A modern landscape constructed of office buildings, shops, department stores, museums, opera, concert halls, music halls, restaurants and hotels’.

Soho and St Giles also experienced the breaking up of concentrated communities of the working poor with the construction of Shaftesbury Avenue and widening of Charing Cross Road (these opened in 1886 and 1887 respectively); most notably the total loss of the Five Dials (where Cambridge Circus is today) and Newport Market (Charing Cross Road ploughs right through its site). Thousands of people were displaced as their small homes were demolished for the new roads.

Later, the population decline in Soho, between the Censuses of 1881 and 1891, was 20%, with Soho losing over 9,000 residents. This shrinkage was second only to the population fall in the Square Mile itself, which took place for broadly similar reasons.

One-quarter of the 42,000 residents of Soho and St James’s worked in the tailoring trade, and almost half of that one-quarter could be described as “poor” or “very poor”, according to the methodology used by Charles Booth and adopted by Robert Valpy. The fashion houses of Regent Street, Bond Street and Oxford Street, and the bespoke gentlemen’s outfitters of St James’s, had been shifting from in-house workshops to outsourcing manufacture via middlemen. This resulted in a drop in wages, as home-based workers undercut each other to secure orders. The brightly lit shopping streets of the West End were contiguous to slum streets where the produce was manufactured.

On Charles Booth’s Poverty Map, the two dominant colours within Soho are pink, which signified ‘working-class comfort – steady regular earnings’; but also purple – a funny old designation, which was a mixture of poverty and small businesses, being home to a broad range of incomes. One distinction Booth made was that purple streets featured ‘large houses that were no longer inhabited by the class they were built for.’ You see this mentioned a lot with regard to West Central London – that the working poor of the West were often to be found living and working in what had formerly been the most aristocratic part of town. In the late 19th century, certain houses had china plaques upon them commemorating that they were once the home of such luminaries as poet John Dryden (in Gerrard Street) and artist Joshua Reynolds (in Leicester Square). The Duke of Grafton’s Southampton House in Bloomsbury Square was now subdivided up and inhabited by the poor; the former library of Charles I, subsequently a prayer room in the time of Cromwell, was now an industrial school and night refuge. The ghostly presence of the Stuart and Georgian elite is more palpable in writings about Soho, Covent Garden and the Strand district in the late 19th century than it was in the East. 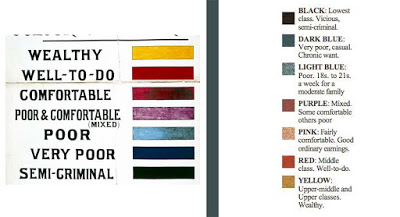 There are also smatterings of ‘black’ on the map: Soho was a place of ordinary street villainy, such as you would find more famously in the East. From the Booth police notebooks we have this snippet, from Constable Dunn, on Turner’s Court, just off St Martin’s Lane: ‘The worst spot in the sub-division... Has had many fights with the inhabitants; a policeman’s throat cut three months ago. A bad class of rough living here. Lower-class market porters and costers.... thieves but not prostitutes living here.’
In one of the last volumes of Life and Labour, this account of life in Soho in the 1890s is given – in highly coloured, not to say bigoted, language: ‘It is indeed a strange, outlandish population with which the churches and missions attempt to deal, and its social diseases are varied and numerous. Not only have we the criminal and outcast, the utterly vicious and the hopelessly drunken, the veriest refuse of London life, together with a low class of casual labour; not only have we the harlot and those who facilitate and live upon her trade; not only the unwholesome conditions of theatrical employment and the occupations which depend on the London season; but here are gathered together every kind and description of foreigner…so that Central London as a whole is in some ways as completely cosmopolitan as it is in others curiously insular and self-contained. We hear of instances in which five languages are spoken in one house, but as a rule the people of each nationality seem to select some particular street as their own… There is an army of hotel and restaurant waiters, shop assistants, theatrical employees and printers – the poorest are the odd-job men, market porters, hawkers, sandwich men, flower sellers and widows dependent on char-ring and office cleaning. There is a colony of Jewish tailors round Broad Street in Soho. Prostitution, pursued largely by non-residents, may also be considered a regular occupation in this district, both in the central parts and along the Euston Road in the neighbourhood of the large railway termini.’

You can explore Booth's Soho for yourself on the London School of Economics Booth website, which has high quality downloadable copies of the Poverty Map, as well as digitised versions of the original Booth notebooks on Soho:

Sarah Wise teaches a 6-week Iintroduction to Charles Booth course at The Bishopsgate Institute and the City Lit. She is the author of The Blackest Streets: The Life and Death of a Victorian Slum (Vintage)